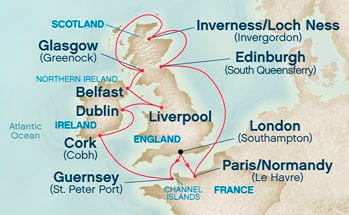 The British Isles makes a great anniversary  cruise. We did this one for our 40th wedding anniversary and there were several other couples on board taking this cruise for their anniversaries too.

For your cruise planning purposes listed is the cruise itinerary and some notes about each destination. We cruised on the Princess Caribbean but other cruise lines do this trip as well. -Robert Fowler

Wednesday, August 14th Delta flight departing 5:30pm. Since this was a long flight from the US we pay $99 each to upgrade to Economy Comfort seats which have more leg room. We think it was worth it, as this is a long flight. Thursday, August 15th arrival at Heathrow. We stay at Hilton London Heathrow Airport near gate T4  (we choose this hotel because it was at terminal 4 where our Delta flight arrived. A friend recommended and it has good TripAdvisor reviews also. )
Suggestions: Rather than stay at a hotel at the airport, I would highly recommend either booking a hotel in London or going ahead with a trip down to Southhampton where the cruise line port is.  The hotel was nice as you can see in the photo to the left but we felt like we wanted to see and do more this first day.

Friday, August 16th –  Heathrow Tour to Southampton via Stonehenge leaving at 9:00am.  Morning Transfer To Southampton Cruise Terminal via tour bus from our hotel with stop at Stonehenge. Rode through several small villages in the English countryside on the way to Stonehenge. Stonehenge was a thrill to visit. New visitors center being built at Stonehenge that will then take you to the site via transportation rather than the parking lot at the entrance we used.  The parking lot will be recovered back into natural land. We stayed for one hour before getting back on the tour bus for the short trip down to Southhampton. Wednesday, August 28th – In London we stayed at The Darlington Hyde Park hotel which was near Hyde Park off Sussex Gardens, a lovely area with many restaurants and pubs.  We could easily walk to Hyde Park, Kensington Gardens and Paddington Station where you can take trains to anywhere in England or the express tube to Heathrow.

We did the Hop On Hop Off bus tour but it was a little too much to do on the busy day.  These take a long time and at the end we felt we were lucky to get back to our hotel after having to change buses three times.  This could be nice, but not to be rushed.

Thursday, August 29th – Very nice English Breakfast in our hotel.  We met our friends and did a tour of Kensington Palace and the free cart shuttle actually gave us a free tour of Hyde Park including the playground where the Royal kids played.

Next we went to Buckingham Place for the Changing of the Guard where I took this nice photo. Then we walked towards the Thames River and stopped by the famous Sherlock Holmes Bar where I got a Cheddar Cheese sandwich and their local beer

Friday, August 30th – Walked quite a bit sightseeing. Toured the Churchill Bunkers which was amazing. Tonight was special as we had great seats to see the musical “Billy Elliot ” at the historic Victoria Place Theater which we really enjoyed.

Saturday, August 31th – Rather than taking the Paddington Station tube, we just took a taxi to Heathrow and that was a great idea. It didn’t cost anymore and we were picked up at our hotel for our early departure. Delta flight to Atlanta.